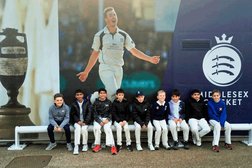 Under 11s triumph at Lords

On Saturday 11 December our U11s took part in a three-game tournament at Lords cricket ground against some very decent opposition and, according to Director of Cricket, John Maunders, produced an amazing performance "from the first ball to the last."

Sunbury faced – and beat - Aston Rowant, Primrose Hill and Chelmsford in the group games and took on Primrose Hill again in the Final. A commanding batting performance saw Sunbury post 140 off 75 balls before bowling Primrose Hill out for 50.

“The opposition were by no means weak,” says John. “Sunbury just played awesome cricket all day and adapted to the indoor game superbly showing high skill levels, awareness, smartness and team morale. They were a credit to themselves and their club.”

A special thanks to Tim Bloomfield for providing the transport (West Ham’s team coach no less!) which meant that the team could travel in style together and plan the day ahead. It really fostered a sense of team spirit and enhanced the whole experience. A great day was had by all players and all parents who attended.

Extra congratulations to Alfie Granger for winning Player of the Tournament!