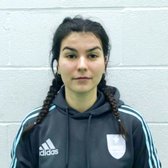 Chloe Brewer hit a career best of 79 for South East Stars against Southern Vipers in the Rachel Heyhoe-Flint Trophy at The Oval today. The 50-over competition is played between eight newly formed regions who make up the women’s elite domestic structure The South East Stars is the name for the team representing the centre of excellence for women and girls’ cricket based in London and the South East of England.

Opening the batting with England’s Bryony Smith, Chloe soon established control, reaching 50 off 76 balls, and going on to top score for the Stars with 79, before she was dismissed by England women's Academy bowler Lauren Bell in the 35th over with the Stars 145 for 4. The score was also Chloe’s career best, and came off 107 deliveries and included 12 boundaries.

Also playing for the Stars was Chloe’s fellow former Sunbury Colt and Surrey Women team mate, Rhianna Southby. Never to be under estimated, Rhianna came to the crease with the score on a much depressed 186 - 8. Playing in support of Grace Gibbs, the pair put on 41 for the 9th wicket with Rhianna playing an anchor role finishing on 8 not out at the close. As so often with Rhianna, her scores belie the value of her contribution with the bat.

Alas the score was not enough with Southern Vipers reaching the Stars' total in the 48th over with 4 wickets in hand.