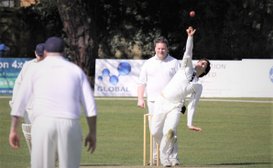 A weekend disrupted by weather

Wins for the 2nd and 3rd XIs, no play on Sunday

[Photobomber: M J Lowe]
There was some good news at least for the 2nd and 4th XIs but it was a case of dampened spirits elsewhere, for one reason or another.

The good news was convincing wins for the 2nd and 4th XIs. There was an unfortunate abandonment for the in the 1st XI match and defeats for the 3rd and 5th XIs. The weather intervened to ensure that there was no play on Sunday in a rain dominated weekend!

First XI (scorecard)
Despite surpassing the 20 over DLS target, thanks to some supreme hitting from Sam Burgess (48), the match was abandoned without the need for another delivery to be bowled. Excellent spells in the first innings were led by Vishal Manro (3 for 16). MOTM – S Burgess.

Second XI (scorecard)
A comprehensive victory for our exciting 2nd XI for 2021 means that they are surely looking to push for silverware this year. Dad and yesteryear 1st XI star off spinner, Matthew Todd (4 for 19), bowled with his customary control, supported well by Justin Granger, before Aaryan Pillai (72*) and Subhan Ramzan (30*) saw the side comfortably home. MOTM – A Pillai.

Third XI (scorecard)
The 3rd XI fell to a disappointing defeat against Reigate, though credit must be given to Jack Southby who plumbed the heights with an entertaining innings of 47 which threatened Reigate’s total.

Fourth XI (scorecard)
This was the win of the weekend, with Ranjit Gopi (3 for 11) leading the way with the ball. In our inning a swashbuckling innings from Mark Bitmead (48*) led the team to a first league victory of the season. MOTM – M Bitmead.

Fifth XI (scorecard)
Although rolled out for 102, the 5th XI fought hard in their defence of the total but were unable to prevent Old Hamptonians from reaching the target and taking all the points.